FACT: Israel’s security barrier is designed to keep terrorists from infiltrating Israel and murdering Jewish and Arab civilians. Only around 5 percent of the barrier is actually a wall; roughly 95 percent is a small fence. Before the barrier’s construction, Palestinian-Arab terrorists walked into Israel on a regular basis and murdered civilians. 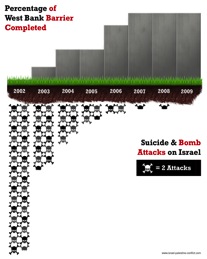 Even the leaders of Palestinian-Arab terrorist organizations admit that the barrier works to prevent attacks against civilians. Abdallah Ramadan Shalah, a leader of the Palestinian Islamic jihad, said on TV that his group was determined to continue suicide bombings, sniper attacks, and other forms of terrorist “resistance,” but lamented, “there is the separation fence, which is an obstacle to the resistance, and if it were not there, the situation would be entirely different.”

While the security barrier inconveniences some Palestinian-Arabs by restricting some people’s movement, it is an unfortunate necessity that has proven to stop terrorist attacks against Arab and Jewish civilians. After trying to engage in peace talks with Palestinian-Arab leaders and after trying to give them land to create peace (but being met with more terrorism instead), Israel had no choice but to build the security barrier to protect its citizens.

Have you experienced
antisemitism at college?